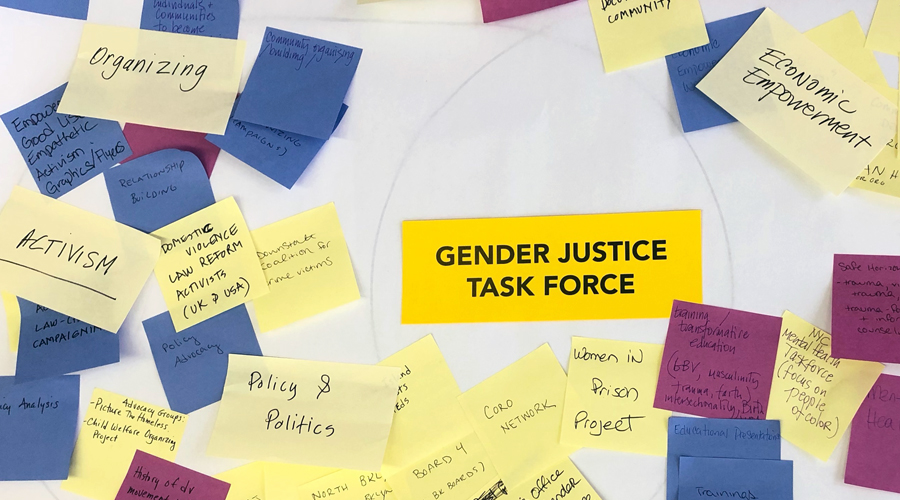 The Gender Justice Task Force is a self-organized body born out of a direct response to how domestic violence and gender-based violence is addressed and responded to across the city. The Task Force includes membership of up to 40-50 members appointed on a rolling basis. All members represent different NYC communities, and meet quarterly to discuss systemic interventions and best practices that promote a just society for all. Members on the Task Force represent a diversity of practitioners within this subject-matter including activists and advocates, educators, social service workers, and survivors. When Task Force members come together, they share the three core goals of better supporting survivors, supporting grassroots organizations that service survivors, and holding levels of government accountable when it comes to combating gender-based violence.

TYTHEdesign was solicited by the Gender Justice Task Force in the Spring of 2019 to support their understanding in building a more robust and effective Task Force. Initially, TYTHE drafted and circulated a survey with members, which revealed their shared desire to engage deeper in strategic visioning for the organization. This led TYTHE to design two visioning workshops where members could gather outside of their regularly schedule meetings and begin to collaborate on establishing activities that can support their visions for success, which all move the dial further towards achieving their core goals. Both workshops revealed insights for how members can best support and celebrate one another, build shared leadership, and promote mission alignment across the Task Force.

TYTHE collected and synthesized all of the workshop insights to develop three strategic roadmaps for success that cohesively address their aspirations, accountability, and timeline for tracking their short and long-term goals.

An asset index was also designed for members to compile and expand their internal and external assets that support their visions for success.

These outcomes will support the Gender Justice Task Force for their next phase as they continue to build capacity across their stakeholders and implement organizational development strategies that are rooted in social justice.